This August, the family and I decided to take a long holiday through Rajasthan. So we touched down in Jaipur Airport and all eight of us climbed aboard a large and very comfortable Tempo Traveller that would be our home-of-sorts for the next few days. We were also famished because of staying up for most of the previous night in an attempt to get on to the right flight and hadn't opted for the pre-ordered meal.

So we asked the driver, another staple that would last through the trip, what he would recommend. He took us to a place called Bombay Mishtan Bhandar that had some of the unlikeliest choices for the first meal of the day but we weren't complaining when we saw how good all of it was. Samosas, kachoris and jalebis, this is what breakfast in North India looks like. The kachoris were in two varieties too, with the larger ones sutffed with soft spices potatoes. Yum yum.

After checking in to the the Surya Villa Hotel and stretching our backs to work out the soreness from the previous night, we went for lunch to Peacock, where we got an aerial view of the city. You could also see an old fort from the rooftop location. We had some of the best Laal Maas of the holiday, a dish that we would order at various places but not be quite as pleased. The bill amount here was also most acceptable at a little more than Rs. 1000, despite being popular among the non-locals. At other places, a plate of what can only be called an excuse for kebabs cost Rs. 1000 on its own. Sheesh.


Most of the rest of the day was spent ambling in front of Albert Hall Musuem where I ran through clusters of many silly pigeons and driving past Hawa Mahal in the old part of the city that we would return to the next day for photos.Dinner was at Handi which was nothing short of fabulous, although we learnt that the daal bhatti churma is an acquired taste.

Bright and sunny at the Amber Fort the next morning, we hired a guide and were told all about maharajas and times gone by. I even sat atop an elephant and later fed him. Sorry, her.

We saw City Palace later in the day with its regal courtrooms. The sound and light show back at Amber looked promising which we did make it back in time for but the rain played spoilsport. Same with Jantar Mantar. Out of time, we headed to Jodhpur, but saw Jal Mahal, which gets its name from its location in the middle of a lake, on the way.


Although we weren't in Jodhpur long, as long as you don't miss the Mehrangarh Fort, you're okay. So so beautiful, it's from high up on this magnificent landmark that you understand why Jodhpur is called 'The Blue City.' It was crazy hot but we found a cooler spot in one of the tiny cafes on the premises and sipped on some icy orange soda. Best feeling ever. Dinner was at On the Rocks, two nights in a row. Moderately priced, tasty food. And then we were on our way to Jaisalmer.

The hotel that we stayed at made us fresh breakfast of aloo parathas and yoghurt before we went sightseeing. We saw the Sonar Quila, which was different from the others in that it is a 'living fort.' This means, people actually live in its quarters. So there's traffic, noise, bustling life. A sudden downpour took us by surprise but it was fun getting wet since we dried off soon after. 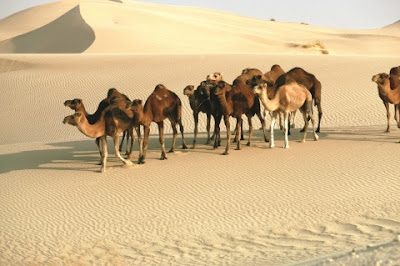 Our time in Jaisalmer probably captured the essence of why we had come to the state. It was also the highlight of the trip, when we driven several kilometres into the desert, where we went on camel back to untouched sand dunes. They were massive and beautiful and we ran all over them until sundown. When we returned to the camp, there was a traditional song and dance program in store followed by dinner. Too partied out and blissfully happy, we called it a night.

Most of the following morning was spent recovering in the Tempo Traveller, sleeping off the wild ways of the previous night. We got to Bikaner and just checked in to the hotel. Dinner was at a place called Rendezvous opposite the hotel, where we also celebrated my birthday, which happened to be on the day. Before we knew it we were on the flight back home. I didn't want it to end. Not so soon at least. The languorous road trips, the many dhabas that we stopped at on the way which looked strikingly similar to each other. The many photographs documenting my first tryst with North India. But most importantly, the memories, the laughter, the good times. So worth it.

Tell everyone what you just found out